The Trouble with Triscuits

On March 25, Sage Boggs shocked the twittersphere with his revelation that the brand name Triscuit was a portmanteau of “electricity” and “biscuit.” In a time when seemingly all anyone can talk about is the coronavirus pandemic, Boggs’s thread provided some much-needed levity and excitement. It elicited a statement from Triscuit’s official Twitter account: “We had to go all the way up the ladder but we CAN confirm.” The account even added a lightning bolt to its username and changed its bio to “elecTRIcity biSCUIT.”

But do we really know Boggs is right?

Let’s acknowledge the work that Boggs did to satisfy his curiosity: he came up with an initial theory, contacted the company, and sought out primary-source documents—all tactics that a historian would use to develop an argument. Triscuit’s confirmation of the theory satisfies many that Boggs’s theory is correct, and it also helps that the theory is the sort of surprising factoid people love to share at parties. But if a historian wants to make this sort of claim about individual people’s intentions over a century ago, then much clearer evidence is needed.

The electricity biscuit thesis is certainly plausible. It is supported by some of the early ads, as well as by the manufacturing process. The Natural Food Company invented a way to spin wheat into threads that could then be cooked and woven into biscuits—which we know as Shredded Wheat today—or cooked again in an electric oven to make Triscuits. In 1903, Triscuit ads proclaimed that Triscuits were the first commercial bread product to be “baked by electricity.” Some of the earliest designs even incorporated lightning bolts into the lettering of “Triscuit.”1 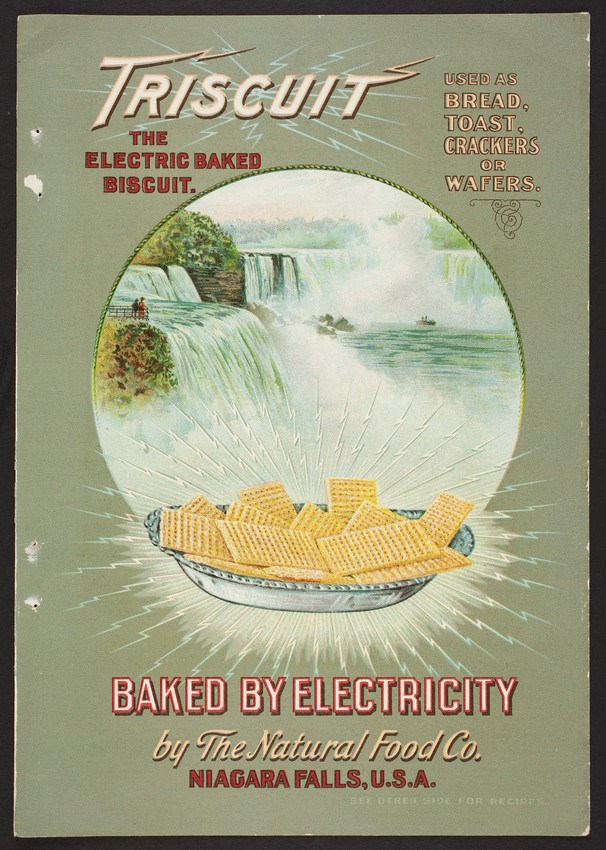 So it’s indisputable that Triscuits were strongly and intentionally associated with the electric baking process. But did the Natural Food Company name their cracker “Triscuit” specifically to evoke the middle syllable of “electricity?” That’s a much harder question, and requires both a broader understanding of the culture of advertising in the early 20th century and also a deeper inquiry into how the “Triscuit” name operated at its inception.

Compared to the post-modern, irony-laden ads of the 21st century, advertising in 1903 was extremely naive. Ad copy was hopelessly earnest, and would not hesitate to spell out any puns or questionable pronunciations for the reader. For this reason, and also because “electri-” or “electro-” were more common and intuitive phonemes for evoking electricity, one would expect Triscuit ads to have made the etymological connection between electricity and Triscuit explicit. But no such clarification can be found, not even in The Niagara Falls Electrical Handbook, a 1904 guide with several pages dedicated to the Natural Food Company factory and the Triscuit-making process. The handbook describes the Triscuit oven as “The Electric Triscuit Oven,” which could conceivably support the electric biscuit thesis but could also not—if the Triscuit was understood to be an electric biscuit, wouldn’t “Electric Triscuit Oven” have sounded redundant?2

Other theories about the name exist, some more plausible than others. Many have suggested the name derived from triticale, a late-19th-century hybrid of wheat and rye, but there is no evidence that this was used to make Triscuits. Instead they were made of regular old wheat, genus Triticum, another possible source for the Triscuit name—but since a cracker made of wheat is hardly distinctive, this idea isn’t particularly plausible either.

A more compelling explanation is that the Triscuit is just a next-level Biscuit, perhaps referring to being thrice-baked, relying on the etymology of “biscuit” as meaning “twice-baked.” While Nabisco’s email to Boggs insisted the “Tri” does not mean “three,” that should only be interpreted as a corporation’s preference for how its brand should be perceived today, and not as a historical claim—especially since Nabisco stated they have no documents pertaining to the name. In the early 20th century, the Natural Food Company consistently advertised both Shredded Wheat Biscuits and Triscuits together, stressing the connection between the two names.3

In fact, consumers of the newly introduced Triscuit interpreted the name to mean “thrice-baked,” and made no apparent connection to electricity. In a favorable 1903 review of the cracker, the Edinburgh Medical Journal wrote, “The name Triscuit is rather neat, although as far as we can see, unsupported by any evidence (for biscuit means, we believe, twice-cooked, triscuit thrice-cooked).” The review expressed doubt that the Triscuit was actually cooked three times—even then, the name was a source of confusion.4 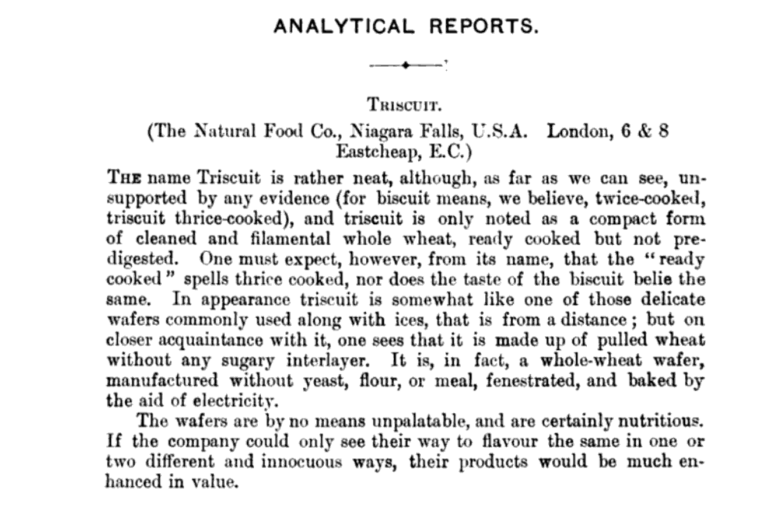 One final theory, brought to my attention by the off-Twitter historian Michael Kideckel via his on-Twitter colleague B. R. Cohen, is that the T in “Triscuit” could have been from “Toast,” because they were made on an electric toast machine that became known as the T-machine. This theory is bolstered by an April 1903 letter from Darius O. Mills of the Niagara Power Company (which supplied the electricity to produce Triscuits) to Henry Perky of the Natural Food Co., wherein Mills referred to Triscuits as an “Electric Toast or Cracker.” And notice that in the ad above, Triscuit is proclaimed to be “the New Toast,” with a capital T.5

Even if the electricity biscuit thesis is true—and that certainly remains a possibility—electrical baking as a selling point was obsolete within two years of the invention, when Pillsbury rolled out electrically baked biscuits in 1905.6 That means we shouldn’t expect to see anything hyping the electricity connection for long, and the extant advertising seems to bear this out.

This admittedly ridiculous rabbit hole is an illustration of the challenges historians face not only in formulating a well-supported argument, but also in competing with popular explanations for events. In just a few days, the electricity biscuit explanation has taken hold as the answer, even earning a “True” assessment from Snopes. elecTRIcity bisCUITS—get it?! What historian would want to stop the party? The sheer enthusiasm on display renders any skepticism a buzzkill.

In any case, there’s far more to the Triscuit story than this etymological quest. The early days of the Triscuit take us to a world newly powered by electricity, a nation obsessed with scientific progress and pure food. Triscuits and Shredded Wheat were intended to be a central part of the daily diet, topped with everything from creamed peas to fricasee of oysters to Bromangelon, a pre-Jell-O gelatin dessert. It was a wild time.

And it must be noted that this is all happening while we are all stuck at home with no access to physical archives. If there’s a crucial piece of evidence in some folder somewhere, it’s currently locked up. 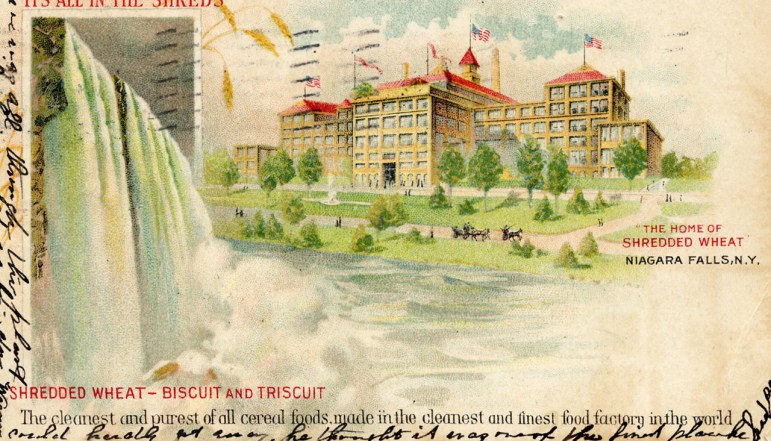