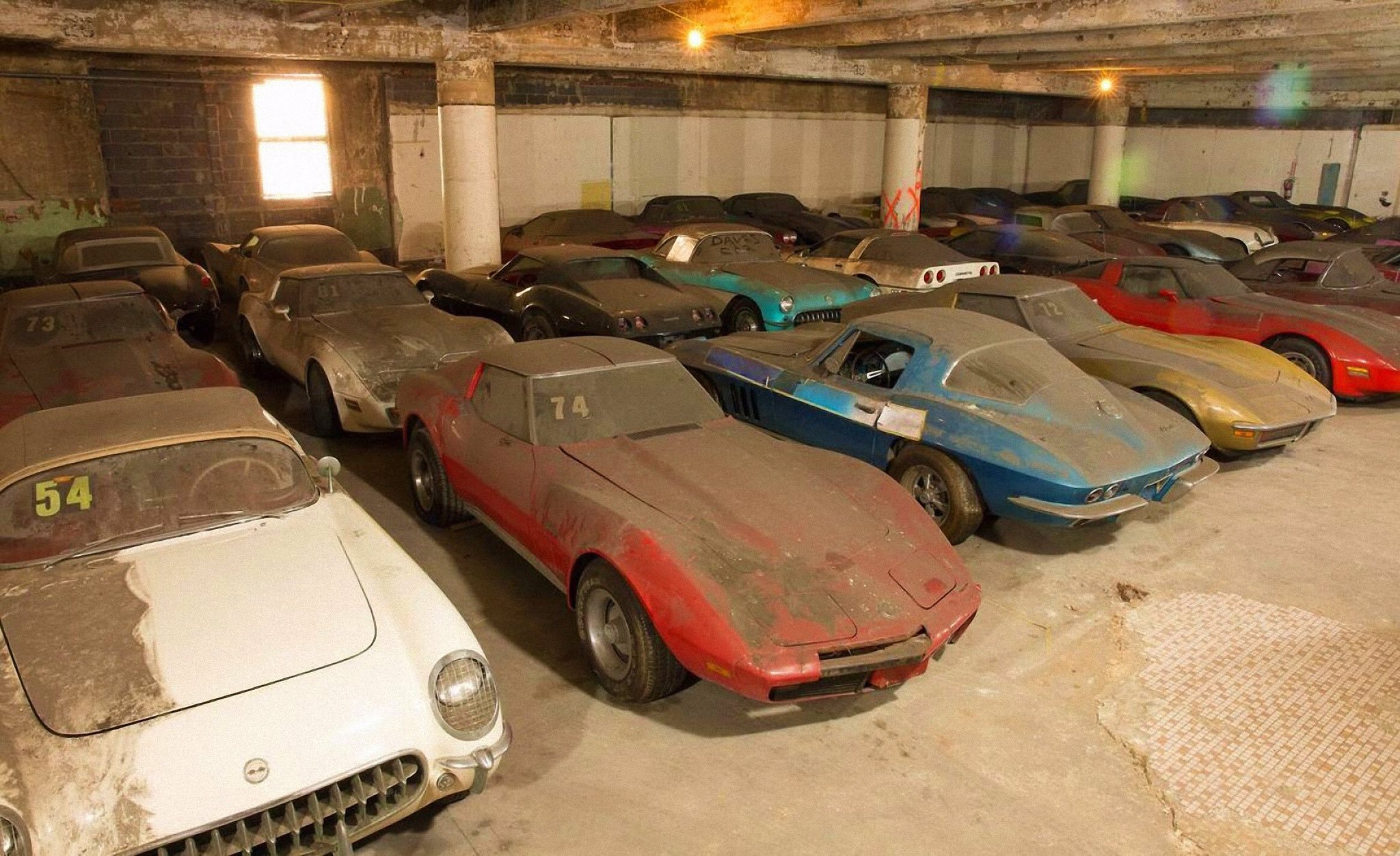 In 1989, VH1 gave away 36 vintage Corvettes in a contest. The winner sold those cars to artist Peter Max, who let them rot in a Brooklyn parking garage for twenty years. The cars recently disappeared. This is their story.

Thanks to the smart work of Daniel McDermon over at the New York Times, we're finally piecing together a story that we had heard snippets of for years but never nailed down.

In 1988, VH1 was struggling for ratings. As part of a publicity stunt, the music video network spent a truckload of money on 36 vintage Corvettes. The cars were given away in a telephone sweepstakes the next year, and one winner walked off with the complete set.

The contest was the brainchild of freelance TV producer Jim Cahill. VH1 charged him with the task of raising the network's national profile and attracting the then-vibrant baby-boomer demographic. He came up with the idea — give away one car from every year of the Corvette's three-and-a-half-decade history — while sitting on the freeway in Los Angeles.

What followed was a buying spree of epic proportions. Over the course of several months in 1988, Cahill spent $610,000 — roughly $1.1 million when adjusted for inflation — of VH1's money on what must have seemed like the automotive purchasing orgy of a lifetime. According to a period article in Vette magazine, the 36 cars that he bought were "drivers," not "Bloomington cars." Fourteen were convertibles, and 25 of the 36 contained automatic transmissions (eww). Cahill shepherded the cars from commercial shoot to commercial shoot, kept them fastidiously clean, and generally went to town with the whole mess. He also did what any of us would do — he drove one home each night for 36 nights. (He has since noted that, although some of the cars were healthy and drove well, many of them were nightmarishly bad.)

To facilitate the contest and help recoup some of the investment, VH1 set up a 900 number that charged two dollars per call. Prospective entrants called the number to register, and AT&T gave the network $1.49 from every call. 190,000 people called in the first day, 1.3 million registered in total, and VH1 made its money back in less than two weeks. Amazingly, the contest was won by Dennis Amadeo, a carpenter from Long Island who entered only once. He flew to California and was given the five-pound bag of keys by ex-Beach Boy Mike Love in a ceremony in Culver City.

This is where it gets weird.

Enter Peter Max. Max, a Manhattan-dwelling American graphic artist responsible for a large part of the 1960s pyschedelic design movement, was, and is not, a car guy. He gained fame for his "Cosmic '60s" style and use of vibrant color, and while he has painted everything from a Boeing 777 to Dale Earnhardt's NASCAR Monte Carlo, he isn't the type of celebrity to have a Lenoesque garage full of automotive weirdness.
[img]data:image/gif;base64,R0lGODlhAQABAAAAACH5BAEKAAEALAAAAAABAAEAAAICTAEAOw==[/img]

Nevertheless, he bought the cars from Amadeo. As he tells it, he found out about the collection through a friend, fell asleep shortly after, and had a dream that included cheerleaders, the 36 'vettes, and a stadium full of people yelling "They're Peter Max's cars!" Naturally, when he woke up, he got out his wallet. (We make our spontaneous, million-dollar decisions based on REM sleep, too. Doesn't everybody?)

Max contacted Amadeo, made a deal — $250,000 cash plus $250,000 in artwork and a portion of the proceeds should the cars be sold again — and, despite a few reservations, had the Corvettes shipped to New York. Cahill facilitated the preparation and handover of all 36 cars, ensuring that they were both clean and driveable when they were put on the truck.

This is where it starts to get depressing: Because Max was then involved in a number of different projects (not the least of which was an IRS investigation), the Corvettes sat, were moved, and then sat again. They eventually ended up in the basement of a Brooklyn apartment building that had once been a New York Daily News printing plant. They sat there, gathering dust, for years.

[img]data:image/gif;base64,R0lGODlhAQABAAAAACH5BAEKAAEALAAAAAABAAEAAAICTAEAOw==[/img]
It would not be an exaggeration to say that Max's cars were left to rot, nor that he essentially abandoned them. They remained largely hidden until May of 2005, when a New York magazine writer discovered them and wrote a column. A member of the enthusiast forum Digital Corvettes read the column, got interested, and went to take a look. When he posted pictures, the Internet went nuts.
The people who lived in the 'vettes' apartment building soon complained, bitching and moaning because their valuable Big Apple parking spaces were being taken up by a celebrity's fiberglass junkyard. A handful of Digital Corvettes members, including site owner Patrick Gramm, went to New York to find the cars, take a quasi-legal look, and get some questions answered. (Big-block cars? Rare options? A '53?) Countless people wrote emails and forum posts, offering to maintain the cars for free just so they wouldn't rot away. No one listened, Max remained mum, and nothing happened until a few weeks ago, when the cars disappeared.
That, too, prompted an uprising. The collection was so provocative that the New York Times ran a story and several blog posts on it, even going so far as to get David Burroughs, the CEO of Bloomington Gold, to issue a sight-unseen appraisal on the lot. ($840,000, for the record.) A tenant in the apartment building in question tweeted about the cars' disapparance, expressing joy. A Times writer (the aforementioned McDermon) also lived in the building, and his curiosity prompted him to do extensive research, dig up Cahill, and talk to Max. The result was fairly predictable: The Corvettes were in a new, undisclosed location; Max still planned to do something with them but was waiting on financial backing; and Cahill was a bit sad.
And that, it seemed, was that. Or not.
HERE'S THE COOLEST PART: The Digital Corvettes community got its shit together and found the cars. Their new hiding place was discovered by a forum member. The following images appeared on DC two days ago:
...as did, predictably, a new round of outrage.
Max's plans? He wants to buy 14 more cars, bringing the collection to an even 50 examples and the 2003 model year. He also told the New York Timesthat he wants to paint the cars in a more respectful manner and auction them off. Cahill came out of the woodwork, signing up for a Digital Corvettes membership and spilling the beans on the collection's early days. (Random depression: Max's shippers didn't even want the car covers.) And we are, like everyone else, a little sad.
There is a lesson here, but we'll be damned if we know what it is. Regardless, one thing is for sure: No matter who you are, you shouldn't buy a passel of Corvettes if you're going to let them fester in a basement. And Max, if you're out there, listen up: When people offer to fix your cars for free, you listen. Do us a favor and stop hiding your fiberglass light under a bushel, huh?
[img]data:image/gif;base64,R0lGODlhAQABAAAAACH5BAEKAAEALAAAAAABAAEAAAICTAEAOw==[/img]
Photo Credits: Tony Senicola/NYT/Jim Cahill/Digital Corvettes/Jenna Stern

Addendum: A chronological index for the Digital Corvettes posts can be found here.
UPDATE: We received the following from Jim Cahill after publishing this post. It contains a small correction (we had originally noted that he was not a Corvette enthusiast) and a description of how the 36-car giveaway came to be.

The only thing I could add is that I was a Corvette enthusiast when I conceived of the contest. In fact, I had wanted a 'vette all my life, I had just never gotten around to getting myself one. I stupidly bought a Cadillac Seville the first time I could walk into a showroom and buy a great car. After a couple of misguided purchases of Mercedes-Benzes and BMWs (trying to keep up with the SoCal Joneses), I just "forgot" I was a Chevy man and plum forgot to get myself a 'Vette.
But I never stopped loving [the car] and always wanted one...
When I got the VH1 assignment, I was sitting in traffic on the Ventura Freeway near Universal City on the 101-right by the Burbank split to the 134. Awful traffic...and slowly rolls by me a pristine pearl white '62 Corvette. Top down, perfect condition, blinding sun gleaming off the chrome. It was going by slowly enough that the entire idea came to me in what you describe as the "come to Zora" moment. As it passed next to me, I thought, "Damn, son — why haven't you gotten yourself that Corvette?"
I was on my way to Palm Springs at the time, and I started thinking to myself, OK, Jimmy boy, which one would you buy if you could get one?"
The answer was so simple...
ALL OF THEM! I WANT ALL OF THEM!...and thus was born the BIG concept-I WANT THEM ALL DAMMIT!
By the time I got to Palm Springs, I had the math done in my head. The next week, I was in New York with my client pitching the most exciting giveaway in TV history.
Thanks for listening!