How Medical Leeches Move From a Welsh Lab to American Hospitals

It takes a village to run a hospital, and Duke University Hospital is no exception. There are doctors, nurses, medical technicians, administrative staff, an “infection preventionist”—even a handful of service dogs.

But the most surprising member of the hospital team lives in an aquarium. In this home, it undulates slowly back and forth through ultra-pure water, waiting for a doctor to write its name—Hirudo verbana—on a prescription. And today, a doctor does.

The call goes out, and this natatorial health-care provider is quickly loaded into a truck in suburban Burlington, North Carolina. From there it travels along a crowded stretch of I-40 and then I-85, passing redbuds bursting with ruddy blossoms in the early spring air. Though this caregiver hasn’t eaten in months, it will need to be sharp when it arrives in less than an hour in Durham, at the biggest hospital in the state.

The truck pulls up to the loading dock, and the aquarium is hustled up the elevators. Time is of the essence. The creature is wheeled into the room, and the doctor plucks it out of its aqueous home as its circular jaws begin to pulse in anticipation. And then, carefully, it is pressed against the warm skin of a finger. 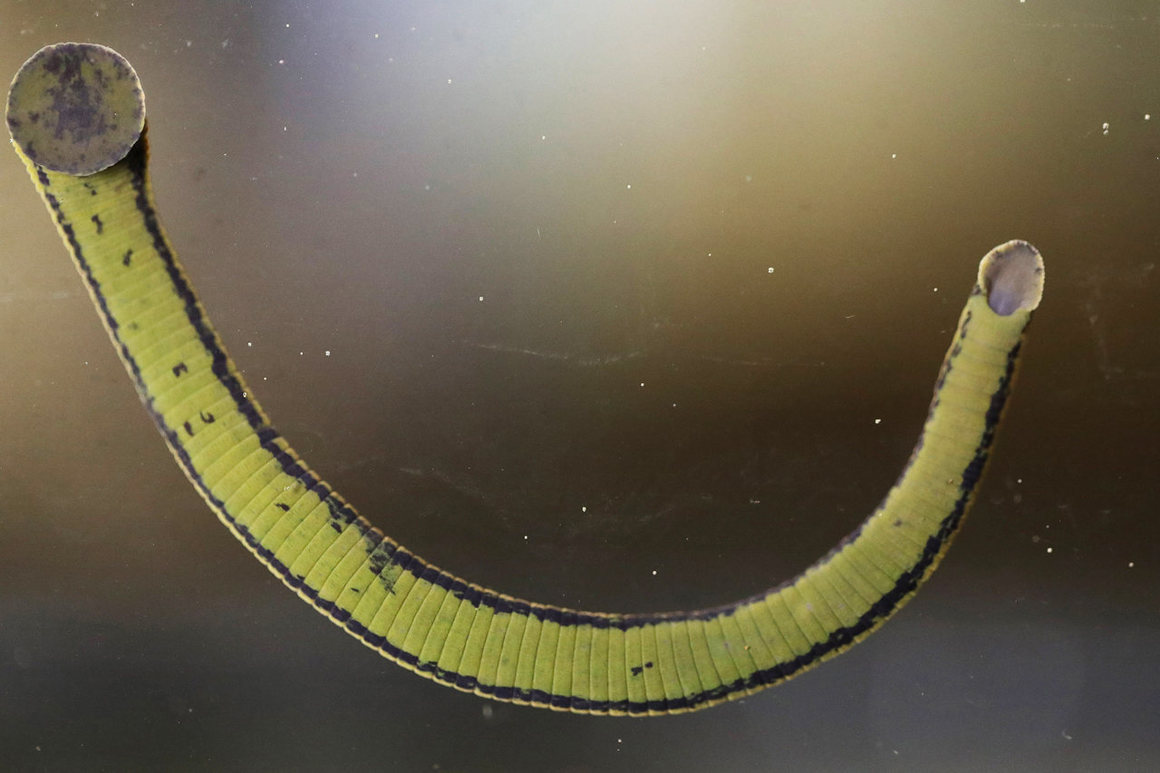 This unique cog in the modern hospital machine is the European medicinal leech. And it’s ravenous.

The modern medical leech is not a myth, or a homeopathy you can only find behind the counter at a store selling healing crystals. Indeed, these toothy worms are serious tools for the 21st-century doctor. At Duke and in prominent hospitals around the country, from Johns Hopkins to the Mayo Clinic, leeches have found particular utility in the post-surgical ward doing what they do best: draining blood.

When an amputated finger is reattached, for instance, transplanted arteries can quickly fill the digit with blood. Without new veins to drain this blood back to the heart, it pools and stagnates, starving the tissue of oxygen and potentially leading to a failed surgery.

Leeches, it turns out, can solve this problem because they’re like attachable sump pumps for getting rid of old blood. Once placed on the skin, the leech uses its three saw-shaped jaws and hundreds of teeth to chew into the soft tissue of a postoperative finger or ear. The process, gruesome as it sounds, is painless and precise in a way that only 100 million years of evolution can hone. As soon as it’s attached, the leech immediately begins draining blood away from the surgical site and into its voluminous stomachs (yes, stomachs).

But what makes the leech particularly useful is its saliva, says Dr. Ronnie Shammas, a surgery resident at Duke Hospital. Leech saliva is thick with hirudin, a natural anticoagulant. This compound causes the wound to bleed for hours after the leech falls off. While blood thinners might accomplish a similar goal, the result would be much less localized. By continuing to apply new leeches, doctors like Shammas can keep the surgery area from congesting with blood until new veins are able to grow and reattach, a process that takes five to six days.

Two years ago, Shammas co-authored a paper in the Journal of Reconstructive Microsurgery that analyzes the outcomes associated with leech therapy over nearly a decade of treatment at Duke Hospital. The study found that leech therapy led to positive patient outcomes—a successfully reattached digit, for instance—more than 60 percent of the time.

“The patients always get a huge kick out of it when we say we’re going to use leeches on something,” says Shammas. “They think it’s the coolest thing in the world.”

Doctors on the hospital floor without leech experience, however, react differently. “Even some of the older [physicians] will be shocked when we say we’re going to use leeches,” Shammas says. “I had never really heard about it too. It seemed like such an outdated treatment.”
What's old is new again.
What’s old is new again. public domain

Indeed, using leeches for “bloodletting” is about as old as medicine itself. Healers across thousands of years of history and widely dispersed cultures have almost ubiquitously had a pail of parasites from the pond in their doctoring toolkit. It’s not completely clear why. Perhaps we draw some innate satisfaction in imagining draining our old body fluid to rejuvenate ourselves with fresh juice—like a human oil change.

Nineteenth-century Western medicine in particular had an obsession with leeches, leading at least one doctor to prescribe more than 90 leeches at a time to a single patient. But by the turn of the century, the use of leeches in medicine (also known as hirudotherapy) fell out of practice as it became clear that infection with pathogens was the usual cause of disease—not “bad blood.” By the 20th century, most physicians had dismissed leeches as old-fashioned and about as effective as snake oil.

But something changed in the 1950s. With the advent of microsurgical techniques—which required new blood vasculature to be reconnected after surgery—came the need to drain blood more precisely and effectively. Pioneering doctors in Europe found leeches to be dreadfully effective at this, and the practice quickly caught on around the world.

So, after its brief hiatus, the leech triumphantly oozed its way back into the hospital as the healer’s sidekick. While it might not restore balance to your bile and phlegm, it can keep your severed finger back on your hand.

As a result of these and more modern impacts on leech populations such as pollution, the Convention on International Trade in Endangered Species (CITES) now protects the medical leech at the same level as the white rhino.

But today, the medical leech no longer hails from the pond. If you live in the United States and are given a leech, it’s likely that it came from a laboratory in Wales.

Carl Peters-Bond is a “leech-growth technician” at that laboratory—the Welsh company BioPharm, which is one of the world’s only suppliers of medicinal leeches. BioPharm has pioneered a trade-secret strategy over its 100-plus years of existence that lets it maintain a colony 30,000 worms strong. Its leeches breed in special chambers that contain a mossy shelf where the mother leech—or father; they are hermaphrodites—crawls up to lay a cocoon of eggs shaped like a microphone cover.

“We collect the cocoons, and they go into a separate tank,” says Peters-Bond. “There they’re suspended in mushroom trays, and in about three weeks they drop into the water below them.” As the leeches grow, they’re fed blood-filled sausages a few times a year.

The medical leech is, aptly, a marvel of anatomy. Each one, in addition to its three-jawed mouth, contains two hearts, two circulatory systems, five pairs of eyes, 32 brains, 10 stomachs, and 18 testicles. The leech body plan is redundancy in the extreme. Leeches can also grow five to 10 times their normal size after a meal, thanks to specialized food-storage organs. Peters-Bond likens the leech to an oil tanker.

This specialized anatomy allows them to eat a tremendous amount of blood and then literally spend the rest of the year bloated and motionless at the bottom of a pond. But Peters-Bond doesn’t like to let his leeches get flabby.

“What normally happens in the wild is after a leech feeds, it sinks to the bottom of the pond, into the mud, and just goes to sleep,” he says. “We have to exercise them when we need them to lose weight.”

How does one exercise a leech? “If they are slightly hungry, says Peters-Bond, “you just put your hand in the other end [of the tank] and they’ll come swimming.”

Biopharm is just the beginning of the esoteric world of leech supply chains. Carolina Biological Supply is Biopharm’s American distributor. Perhaps the only other American medicinal-leech distributor is the mysterious and straightforwardly named Leeches USA, which declined multiple requests for comment due to “[leech] nature and government regulations.”
Y marks the spot.
Y marks the spot. Buiten-Beeld / Alamy

Carolina Biological is located just down the road from Duke in Burlington, North Carolina. The company receives a shipment of a few thousand leeches from Biopharm every six weeks, then stores them at its facility until a doctor requests their presence at Duke, or any other major hospital in the country.

The leeches arrive at the hospital in a plastic container of water—you can get a 12-pack for $49.40—hungry and ready to feed. Because the type of surgery that requires leeches is so time-sensitive, Carolina Biological maintains a “leech duty” schedule for employees to ship them out at a moment’s notice, says Keith Barker, the company’s manager of product safety and compliance.

The leeches are maintained under strict quality-control procedures approved by the Food and Drug Administration, which technically considers the leech to be a “medical device.” As is does with scalpels or ibuprofen pills, the FDA has high standards for how to maintain cleanliness in leech-housing facilities. “It’s not just some wild leech from a pond,” Barker stresses.

Modern medicine has undergone a dramatic transformation over the last few centuries, and today’s hospitals would be largely unrecognizable to the surgeons of yore. Yet despite all the advances, we still, in certain circumstances, continue to implement medical traditions that have been with us since the dawn of time.

“There’s not the bloodletting and that sort of thing [anymore],” says Barker. “But in modern surgery, there is still an opportunity to use an ancient technique. I find that fascinating.”

Barker guesses that his leech admiration is rare. But knowing what good they do in the medical world, he’s not repulsed by the parasitic worms.

“Oh yeah, I’ve got a lot of good feelings about the medicinal leeches,” he says, beaming. “They’re little hero animals.”