It's My Birthday today...

Points will be accepted in lieu of flowers...

Did the modeling thing...

So I did that modeling thing last night. You know, that NUDE modeling thing. It was all very tasteful etc, let me assure you, it being through the University and all. Felt pretty weird as they only gave me a room number and I didn

"Welcome to the Online Slang Dictionary, the dictionary of slang you can help create!

Though Webster publishes a slang dictionary, it could take years for a new slang word or slang phrase to enter its pages. Now, with the power of the Internet, it can be in a dictionary in a matter of hours. We've got American slang, ghetto slang, gangster slang, and English slang from around the world. Click on the "Submit" tab to submit words or phrases you've heard.

Read with caution. This dictionary has been written as tastefully as possible, but some language might be offensive to some readers."

Some vids from Fire Fall

Rowling and her publishers Bloomsbury are seeking two million rupees (50,000 dollars) from the organisers constructing an elaborate castle from canvas and papier mache in Kolkata for the upcoming Durga Puja festival, court officials said.

The Delhi High Court has summoned the builders on Friday to present their case, they said.

The suit, which runs into 394 pages, argues the organisers of the Hindu festival can stage the upcoming event in the gigantic marquee only after paying two million rupees to the British author.

Rowling's fictitious world depicts the castle as an ancient school of witchcraft where her eponymous hero Harry Potter learns wizardry.

The festival organising secretary, Santunu Biswas, said his team would go ahead with the preparations for the four-day festivities, eastern India's most celebrated annual religious carnival.

"What we are building is not a violation of copyright act anywhere in the world because it's a religious festival and has nothing to do with money-making," Biswas told AFP.

Another organiser, Robin Mukherjee, said he was stunned.

"The summons came at a time when the marquee is almost ready and we don't know what to do now as we cannot afford to pay the fine," the visibly angry official added.

"It's just a theme ...We have also modelled the Titanic and no-one sued us," he said. 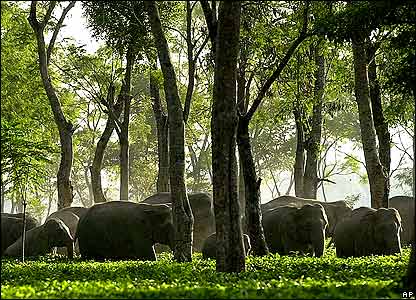 Thousands of villagers were using firecrackers and bonfires to scare away the rampaging animals.

"Dozens of houses have been destroyed in the past three days by adult elephants entering human settlements to look for their wandering calves," said the local magistrate, L.S. Changsan.

Up to 50 families have moved to a local school being used as a refugee camp, Changsan said.

I made this mistake