Climate Warriors Stuck In Arctic Ice (That All Melted Years Ago) 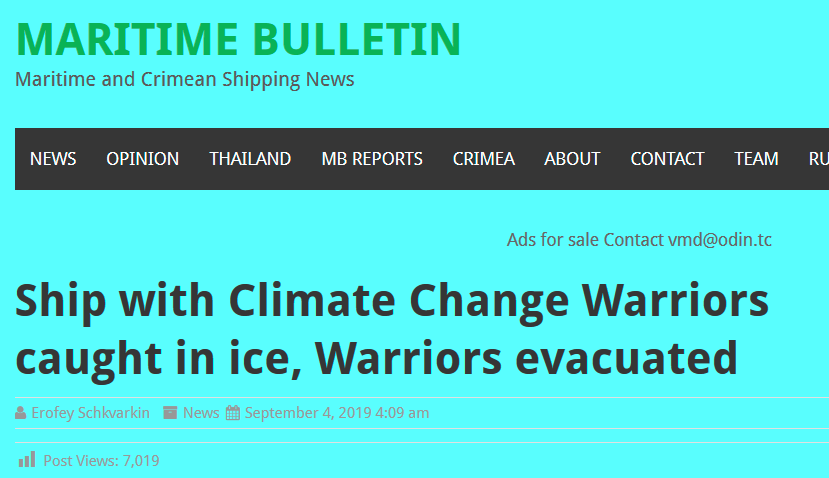 Arctic tours ship MS MALMO with 16 passengers on board got stuck in ice on Sep 3 off Longyearbyen, Svalbard Archipelago, halfway between Norway and North Pole. The ship is on Arctic tour with Climate Change documentary film team, and tourists, concerned with Climate Change and melting Arctic ice. All 16 Climate Change warriors were evacuated by helicopter in challenging conditions, all are safe. 7 crew remains on board, waiting for Coast Guard ship assistance.

Something is very wrong with Arctic ice, instead of melting as ordered by UN/IPCC, it captured the ship with Climate Change Warriors.

Didn't something like this happen a couple of years ago too?

Apparently this is the sixth time

Australian climate researcher Chris Turkey and a crew of climate alarmists on a mission to demonstrate just how much Antarctic ice has been affected by global warming get stuck in unexpectedly thick ice and have to be rescued by helicopter.

Arctic expedition led by veteran explorer David Hempleman-Adams to raise awareness of “permanent irreversible change in the sea ice landscape of the Arctic” caused by global warming is ruined by unexpectedly large quantities of ice.

Global warming research study in Canada cancelled because of ice. “It became clear to me very quickly that these weren’t just heavy ice conditions, these were unprecedented ice conditions” claims the lead scientist, blaming it on “climate change fully in action” and calling it “a wake up call for all of us in this country.”

Arctic Mission sailing expedition to North Pole to raise awareness of global warming has to turn back after yachts find their passage blocked by large quantities of unexpected frozen white substance.

Scientists, students, filmmakers from University of Rhode Island’s Inner Space Center on a mission to “document climate change effects” in the Canadian Arctic Archipelago have to be rescued after the ship is damaged after grounding on unexpected hard, bluey-white substance floating on the sea.

Proving once again that climate change deniers don't understand the distinction between weather and climate.

you 'warmers' are cute.

The time it takes to process a new entry increases approximately with the square of the list length, after checking for duplications, spoofs etc. Starting it was based on the naïve assumption that the rate of appearances would decline as opposing evidence accumulated, but the reverse happened. That’s the difference between science and religion.
[…] There have since been hundreds more claims of an increasingly ludicrous nature.“