Flock of birds that looks like 'Loch Ness Monster' 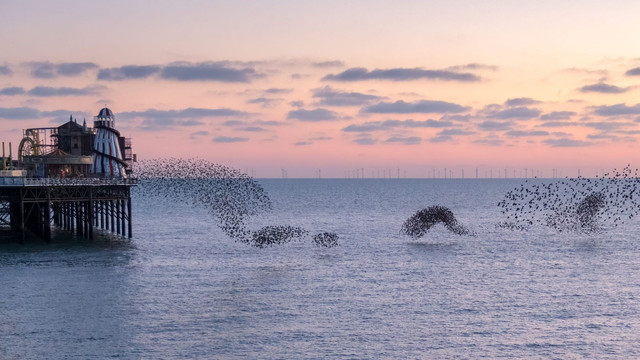 And who says the Loch Ness monster is just a legend?
A photographer in the British seaside city of Brighton has captured a remarkable image of a flock of common starlings that looks like the legendary creature, reports British news outlet South West News Service (SWNS).
Bill Brooks was visiting the city for a photographer course and stopped at Brighton Palace Pier to capture the sunset, but what happened next stunned the 65-year-old.
"I knew I had about a ten or 15 minute slot before sunset when the starlings would come in to roost under the pier and could murmurate," Brooks said in an interview. "I wasn't expecting it to be so spectacular."
He continued: "They swooped in from all over the area and formed this incredible shape right in front of me. The murmuration looked like a monster coming out of the sea to attack the helter skelter at the end of the pier."
The birds, native to the British Isles, can flock in groups of upwards of 100,000, but it's unknown why they murmurate, also known as a flock of starlings.
"I got very lucky," the retired environmental consultant added. "The conditions have to be just right for them to flock like this. It has to be dusk, and with very light winds. The conditions were perfect."