Sarah Silverman fired from new movie over blackface photo from 2007 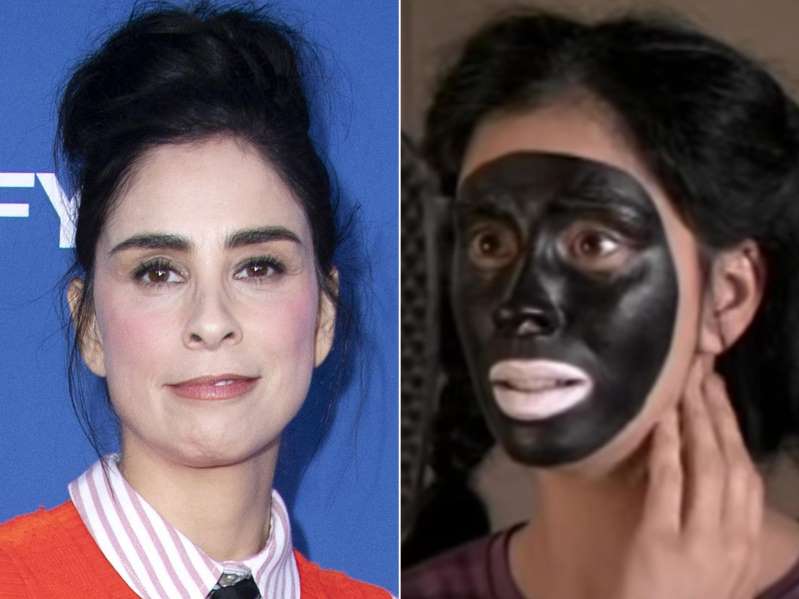 Sarah Silverman has revealed that she was recently fired from a film after producers unearthed an old photograph in which she sports blackface.

While appearing on The Bill Simmons Podcast, the comedian explained that the photo, taken from a sketch in her 2007 comedy series The Sarah Silverman Programme, convinced the film to drop her the night before she was due to begin shooting.

“I recently was going to do a movie, a sweet part, then at 11pm the night before they fired me because they saw a picture of me in blackface from that episode,” she said. “I didn’t fight it. They hired someone else who is wonderful but who has never stuck their neck out. It was so disheartening. It just made me real, real sad, because I really kind of devoted my life to making it right.”

“It’s like, if you’re not on board, if you say the wrong thing, if you had a tweet once, everyone is, like, throwing the first stone,” she continued. “It’s so odd. It’s a perversion. It’s really, ‘Look how righteous I am and now I’m going to press refresh all day long to see how many likes I get in my righteousness.’”

Silverman did not name the film in question, but was most recently cast in a forthcoming Jennifer Lopez romantic comedy titled Marry Me.

In 2018, Silverman told GQ Magazine that she “[doesn’t] stand by the blackface sketch,” adding: “I’m horrified by it, and I can’t erase it. I can only be changed by it and move on.”

About time really. She has tons of offensive shit from her past. Not that I support this behavior (firing for past deeds), but people have been calling her out for years.

You mean she is “sad” about the culture of censorship, of using past sins against people, about the lack of opportunity for redemption that she WAS so eager to push? Oh, poor Sarah!

I wonder how the comedy club owner who's life she tried to ruin feels about this.

Quote by mynameis:
I wonder how the comedy club owner who's life she tried to ruin feels about this.

Quote by REALITY:
One of those who tried to slip seamlessly into the woke Hollywood world and failed


Exactly why I brought up Jimmy.

I dunno...it's funny who gets forgiven and who doesn't. Bill Cosby who raped who knows how many people was still "America's Dad" until the very end. Trump a well know letch...well.....we know how that worked out. A few Evangelicals have their panties in a bunch because he said godamn a few times but everything else is a pass? wtf

Quote by Flee:
About time really. She has tons of offensive shit from her past. Not that I support this behavior (firing for past deeds), but people have been calling her out for years.

I can guarantee you that who/whatever it is they have put out "offensive shit". Unless your idea of humor is "what is brown and sticky? - A stick".

A wise man once said something very similar:
http://www.teoti.com/funny-stuff/146489-pussy.html

As noted, I dont support what happened to her, I'm just not surprised. I support the Patrice O'Neal rule of comedy. There are no rules, and nothing is off limits.

TBH, I never really found her funny, but her type of comedy(offensive) is what I like.

Quote by Flee:
I support the Patrice O'Neal rule of comedy. There are no rules, and nothing is off limits.

I might be slightly less irritated by people who get upset about offensive humor if they were consistent with their beliefs. When it is okay to poke fun at group x but not group y that just shows the hypocrisy of it all.

Jennifer caught some flak for having the audacity to perform a Motown Tribute.. A singer performed songs. However it was deemed offensive simply because Ms Lopez isn't African-American.

I don't get offended by things. Comedy especially. Their job is to try and be funny. I'm shocked by the fact people buy tickets to see someone like Jimmy Carr, then walk out of the show all offended. They didn't review their brand of comedy first? Like the guy that got up on stage and punched Jim Jefferies.

I wonder if that is the real reason she was fired. Giving this as the reason makes her look like a victim, likes she's edgy, willing to "stick her neck out". It is possible that there is a different reason. One that has nothing to do with the studio being shocked at her humor which has had a substantial amount of what some would deem "offensive".

More I think about it, the more I think this 12-year old incident is not the reason.

You are likely right. This was just an excuse they can use to avoid a lawsuit for wrongful dismissal

Quote by Flee:
Not that I support this behavior (firing for past deeds)


Those future deeds are pretty damn tricky too.

Quote by Flee:
Utterly shocked Jimmy Kimmel hasn't been touched due to The Man Show

The Man Show was awesome. Jimmy might have sold out but his past was comedy gold.

Comedy is offensive. THAT'S THE POINT. Sarah is isn't my cup of tea, a bit too crude and her delivery sucks. The blackface sketch I saw on her show... and she certainly was being the opposite of racist. Sure the people who were going to hire her blah blah blah... aren't the point. It's the point our culture has reached that someone obviously doing a parody years ago will get labeled a racist.

Totally agree; leave comedy alone. It's there to break boundaries and the important part is that EVERYONE KNOWS IT'S A JOKE

Can comedy go too far? Yes, but only back stage and on planes.