6
Pub installs electric fence at the bar.
Next

Update (1550ET):  During a press conference where President Trump signed an executive order pressuring social media companies like Facebook, Google and Twitter to stop showing political bias. The order is meant to chip away at the "liability shield" these platforms enjoy thanks to Section 230 of the Communications Decency Act of 1996.

The EO also requires the DoJ to work with state AGs to make sure they enforce laws on "deceptive" business practices. He added that social media companies are "tantamount to a monopoly" and have had unlimited power to shape and alter the national conversation.

When Twitter tags tweets as "misinformation", they cease being a platform and effectively become "an editor with a viewpoint". "What they chose to promote or ignore is nothing short of political activism," Trump said. "This censorship is a threat to freedom itself - imagine if your phone company edited your text messages or blocked your phone calls."

AG Barr, who was also in attendance, said Section 230 "was stretched way beyond its original intention...its purpose was to allow websites that were acting virtually as bulletin boards were not responsible for third-party information...". When they "curate" their collection and start "censoring" particular content, they become publishers, and they shouldn't be entitled to the same kind of shield that was set up earlier. He also explained how the executive order sets up a "rule making procedure for the FCC" to try and "get back to the original interpretation" of Section 230.

It also encourages state attorneys general to come up with "model" legislation addressing this at the state level.

"Currently social media platforms like twitter enjoy a liability shield because they are a 'neutral platform' - which they are not...social media companies who engage in editing or censorship will be stripped of this shield, while companies will be punished should they engage in any "deceptive" acts. Federal agencies will also be barred from buying advertising on these platforms - a direct attack on their bottom line.

Trump said he expects legal challenges to the order, but believes the White House will "do well" with them.

These companies grew because they held themselves out as a public forum...but now that they have become these very powerful networks, they've now switched, and they are using that market power to enforce particular view points," he said. This should be addressed not only via the order, but in court challenges and legislation on Capitol Hill.

Conservatives believe these platforms shouldn't be allowed to show as much bias in favor of liberals and progressive political views.

In true Trump form, the president took a swing at the traditional media, claiming that if press coverage of his presidency was "fair", he would happily delete his twitter account. 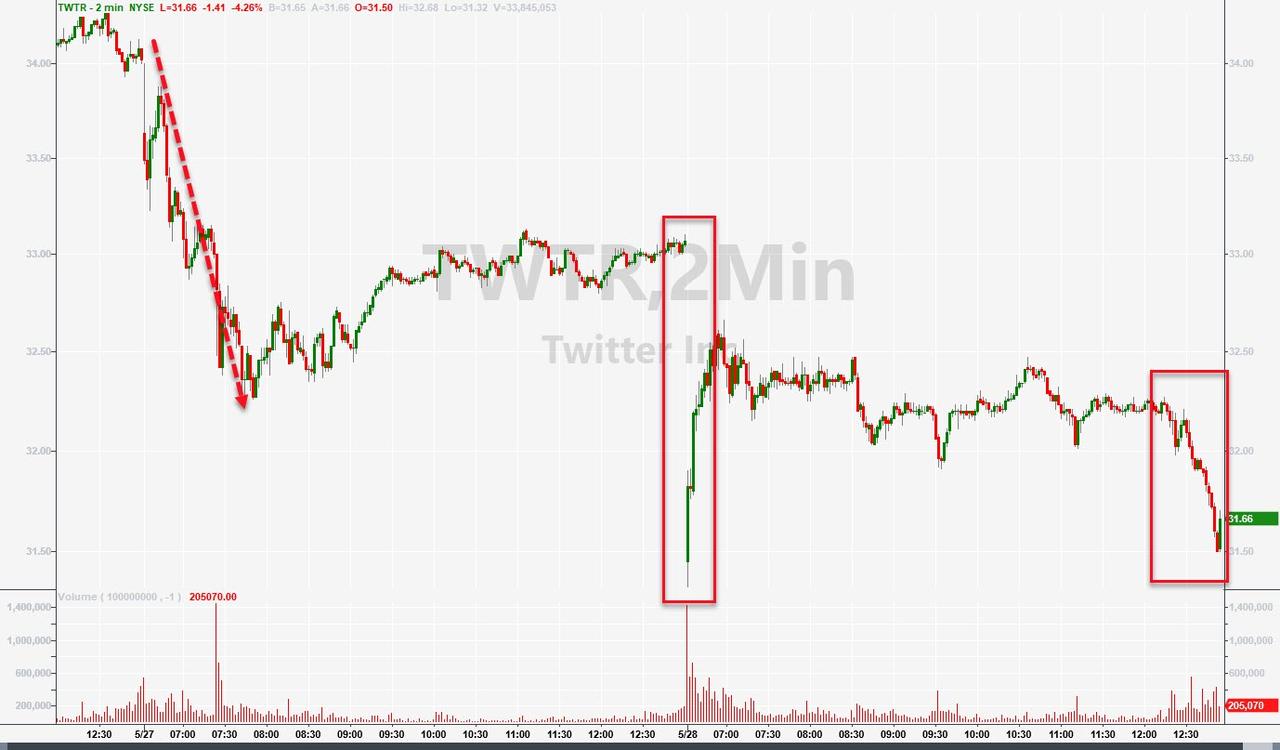 During the Q&A, Trump bashed Twitter's head of site integrity, Yoel Roth, who has made hysterical statements on his own twitter account, like insisting that there are "actual Nazis" in the White House.

Steve Herman
✔@W7VOA
·
2h
Replying to @W7VOA
"He was very upset" by the George Floyd video, says @PressSec of @POTUS.

38 people are talking about this

Update (1300ET): In a hilariously sly move, Trump just sent a tweet that will leave Twitter with an interesting dilemma: Slap another "misinformation" label on a presidential tweet that also includes criticism of the company itself (making it essentially censorship bait), or ignore it and face calls of being labeled "inconsistent" while everybody praises Mark Zuckerberg's more measured approach.

Donald J. Trump
✔@realDonaldTrump
So ridiculous to see Twitter trying to make the case that Mail-In Ballots are not subject to FRAUD. How stupid, there are examples, & cases, all over the place. Our election process will become badly tainted & a laughingstock all over the World. Tell that to your hater @yoyoel
95.2K
5:44 PM - May 28, 2020
Twitter Ads info and privacy

63.4K people are talking about this

Additionally, the FCC has weighed in on the controversy surrounding Trump's executive order, basically saying that it needs to focus on its basic duties, and doesn't have the bandwidth for more responsibility.

Though, of course, that could always change.

Update (1150ET): In a statement that clearly established Nancy Pelosi and the Democrats as the greater of two evils for Silicon Valley tech giants and their leadership, the Democratic Speaker of the House said Twitter had not gone 'far enough' in fact-checking President Trump, while accusing Facebook of selling out the American people for money.

According to CNBC, Pelosi said Trump's executive order, expected to be signed later on Thursday, is a "distraction", but added that Twitter had "not gone far enough" in fact-checking the president, and called the current situation "outrageous"

At Facebook, she accused Zuckerberg of "only caring about making money". "All they want is tax cuts and no regulation...there is no honor among thieves," she reportedly said, according to Mui.

It appears the "techlash" in Washington remains alive and well.

Update (0850ET): Fox Business has just confirmed that President Trump plans to sign an executive order to implement everything we've discussed below.

18 people are talking about this

Fox reporter Edward Lawrence claims that the order will "examine the legal protections" enjoyed by these companies, suggesting that the administration will also lay out its legal rationale for regulating speech on these platforms in this way.

Update (0840ET): Just as we expected, President Trump just confirmed that he will be rolling out his administration's agenda for regulating speech on American social media platforms on Thursday - and will probably make a show of it, to keep the news media focused on his latest culture war, and less about the growing coronavirus death toll.

111K people are talking about this

The first leaks detailing the Trump Administration's plan to iron out left-wing bias on American social-media platforms have just arrived.

During a live on-air report, CNBC's Ylan Mui shared what appeared to be the first details of the White House's plan, which the president said would be released on Thursday. According to Mui, the White House plans to empower the FCC to write guidelines for American social media companies to help them determine what content should and shouldn't be removed. The guidelines will make clear what social media companies can do while retaining the 'liability shield', while also warning how they might lose that protection by being too proactive.

Notably, the plan relies on the executive branch's nearly untrammeled power over the vast federal bureaucracy: Once again, Trump plans to bypass Congress - which has long been reluctant to make any changes to the 1996 Communications Decency Act to account for the advent of social media - to accomplish what has become a critical piece of his agenda ahead of the November election. The DoJ will also be required to create a working group with state AGs, along with a list of other provisions.

There will be a review process before the rules can be implemented, and it's possible they may never be enacted.

And as Mui pointed out, companies face newfound political uncertainty as regulating speech on these platforms becomes a "political football".

According to CNBC, the draft text of the order mentioned two companies by name: Twitter and Facebook. Shares of both companies tumbled in pre-market trade on the news.

For what it's worth, a report published last night claimed that the White House didn't consult the FCC on these new guidelines.

Brian Fung
✔@b_fung
NEW: The White House did not consult the FCC on a forthcoming executive order pertaining to social media companies, according to a person briefed on the matter.

This suggests the draft order has not gone through the normal interagency review process.
11.8K
12:40 AM - May 28, 2020
Twitter Ads info and privacy

5,384 people are talking about this

Though we doubt Commissioner Ajit Pai will have any serious objections to the plan.

Finally, it appears the Executive order does not quite go as far as to call for direct reversals of Section 230 protections... though handing it over to the FCC may well be the warning shot across the social media giants' bows that they need. As Jonathan Turley noted:

The expectation is that the Trump executive order on social media will include a review of Section 230 of the Federal Communications Act for the possible elimination of protections for Twitter and other social media companies. The effort would be hard to succeed without congressional action. As a private actor, Twitter is not the subject of the First Amendment but the President and his administration are.  There are also separation of powers concerns with any unilateral or constructive amendment of Section 230.

Trump in my view is right in condemning the action of Twitter. The focus should be on the company's assault on free speech principles. Anyone who values free speech on the Internet and social media should be appalled by this action regardless of their feelings about Pres. Trump.