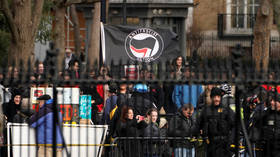 The younger Donald urged Barr to "just do it!!!" in a tweet on Wednesday, referring to rumors that the attorney general is poised to expose links between the "violent radical elements" that Barr denounced in an earlier statement and the politicians and elites believed to be backing them.

28.3K people are talking about this

Barr blamed the violence that has overshadowed "peaceful and legitimate protests" over the police killing of George Floyd last week on "groups of outside radicals and agitators" exploiting the unrest to "pursue their own separate, violent, and extremist agenda" in a statement released on Sunday.

The AG echoed the words of President Trump, who has repeatedly declared the rioters domestic terrorists, and urged state governors to make use of the National Guard in cracking down on the unruly mobs.

"The violence instigated and carried out by Antifa and other similar groups in connection with the rioting is domestic terrorism and will be treated accordingly," the attorney general warned in the statement.

Many of Trump's political nemeses have expressed support for the demonstrations, glossing over the violent elements. Trump supporters, meanwhile, have blamed much of the violence on paid provocateurs backed by currency speculator George Soros and other left-wing bogeymen.