Earth May Be in its Hottest 5-Year Period Ever Recorded
Scientists sound the alarm ahead of the UN Climate Action Summit.
By Jackson Ryan | September 22, 2019 7:15 AM PDT | cnet.com 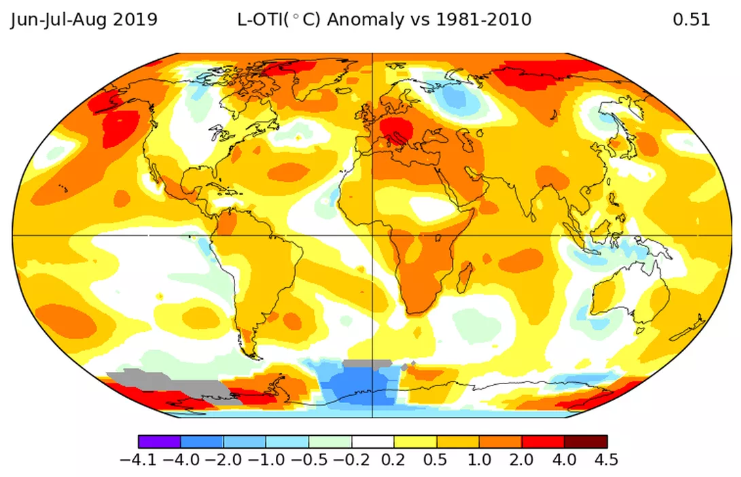 We've just sweltered through the the hottest July ever recorded, complete with extreme heatwaves, and today a landmark report by a conglomerate of climate research organizations demonstrates the planet is warming like never before. The new assessment, commissioned by the United Nations ahead of the Climate Action Summit on Monday, shows the average temperature of the planet between 2015 and 2019 is currently on track to be the hottest five-year period ever recorded.

Released by the Climate Action Summit's Science Advisory group, the far-reaching United In Science report brings together the latest data on the climate crisis from eight research organizations. Its chief message is the Earth's surface is getting warmer and we are slipping further away from halting the carnage. Estimates suggest the period between 2015 and 2019 will be 1.1 degrees Celsius higher than pre-industrial levels and up to 0.28 degrees Celsius higher than the period from 2011 to 2015.

It also paints a stark picture of record-high fossil fuel carbon dioxide emissions and an acceleration in sea level rise and acidity. More broadly, it suggests that current global policies to halt climate change are simply not enough to meet the goals set out in the Paris Agreement by the United Nations Framework Convention on Climate Change.

The chief aim of the agreement, signed in 2016 by 195 countries, is to limit a global temperature rise to less than 2 degrees Celsius by 2100.

To achieve this, greenhouse gas emissions would have to peak by 2020 and decline rapidly thereafter. However, today's report suggests that emissions are unlikely to peak by 2030 -- 10 years after that deadline. While many nations have committed to reducing greenhouse gas emissions since the agreement was signed, the targets are simply not enough and would see temperatures rise up to 3 degrees Celsius by 2100.

For temperature increase to remain below 2 degrees Celsius, the United Nations Environment Programme suggests "ambition needs to be roughly tripled" and greenhouse gas emissions the world over would need to be slashed.

The UN urged in a previous report that 'unprecedented' action would be needed to mitigate the effects of climate change and reach the targets set out in the Paris Agreement. The new look at the data doesn't rule out meeting the lower Paris Agreement target of 1.5 degrees of warming but again stresses the need for rapid, unprecedented change.

"This new assessment is another sobering reminder of the critical state of the climate crisis and a call on governments, businesses and civic society to act more determined and aggressively in reducing greenhouse gases emissions," said Pep Canadell, a contributing author on the report and climate scientist with Australia's Commonwealth Scientific and Industrial Research Organisation.

In an effort to be heard by policymakers, climate strike rallies took place around the globe Friday, with millions taking to the streets in over 160 countries to demand action. The UN has called on leaders to attend the Climate Action Summit, which takes place on Monday.

Yuck, 72-80 is nice and comfortable. I wish it was tropical weather, not hell’s fire all the time weather. No, they are not the same.

Quote by Suckapuncha:
This is good news to me. I hate the cold. I wish it was 90-100 degrees year round.

Viruses also hate heat. Think about when you get sick, your body raises it's temp

Quote by Flee:
Viruses also hate heat. Think about when you get sick, your body raises it's temp

Quote by Flee:
Viruses also hate heat. Think about when you get sick, your body raises it's temp

So you're saying that malaria, Deng fever or ebola are rather common in Canada? Do I need a shot?

I was unaware there are only 3 viruses on Earth

Easy to be the 'hottest' when they alter old data downwards and then destroy the records.