10
What if the Universe has no end?
Next

The Truth About Natural and Artificial Flavors

he Truth About Natural and Artificial Flavors
Kate Dwyer

“Oh my god, this is just like Wonka’s factory!” my friend exclaimed, running her hands over the scent machine’s color-coded collection of buttons. She pressed “Almond,” and the air filled with a nutty aroma. I pressed the “Butter,” “Hazelnut,” and “Almond Extract” buttons simultaneously. The smell changed to toasted almond.

In reality, we were smelling chemicals: methyl cyclopentenolone, diacetyl, methyl methoxy pyrazine, and benzaldehyde to be exact—four common ingredients found in both natural and artificial flavors. The chemicals were coming from an elephant-trunk shaped machine at the Museum of Food and Drink in N.Y.C., a machine similar to those used by international flavor houses like Givaudan, International Flavors & Fragrances (IFF), and Firmenich—responsible for blending flavors into processed foods.

The phrase “made with natural and artificial flavors” is familiar to anyone who’s ever been to a grocery store. But few of us, myself included, ever stop to consider what those words mean. Am I getting some essential oils or a witches’ brew of toxic chemicals? And I assumed that “natural” was better, but is that really the case? So I talked to experts working at the flavor frontier to find out.

The truth about natural vs artificial flavors

The first thing I learned is that natural and artificial flavors aren’t that different from each other, at least not chemically.

“There’s an assumption when you have an all-natural label declaration, that somehow you’re opting out of the tweaking and the futzing about that you get when you have flavor systems made by flavor houses—that’s not how it works,” Dave Arnold, the founder and president of the Museum of Food and Drink, tells me. 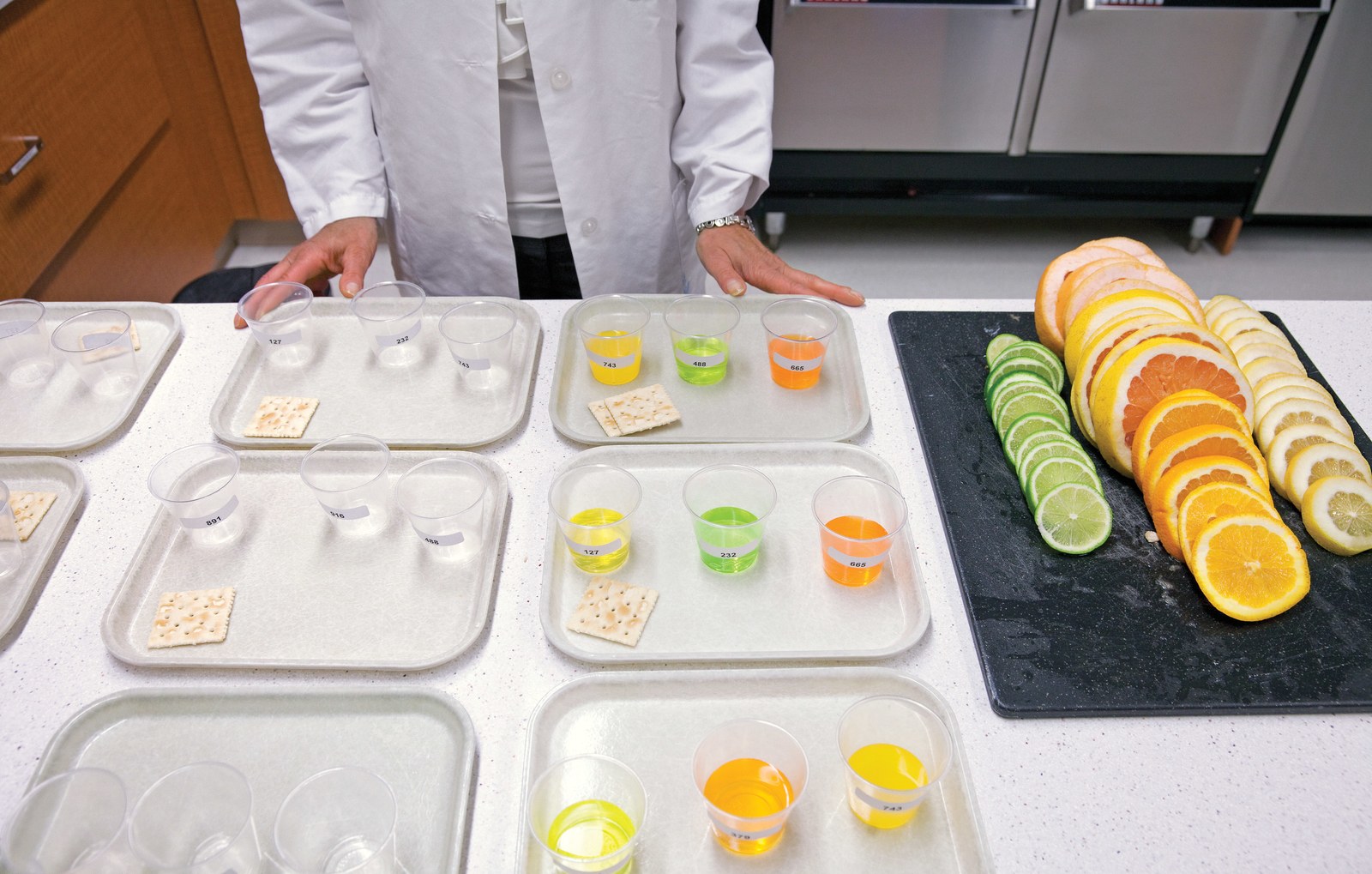 Both natural and artificial flavors are synthesized in laboratories, but artificial flavors come from petroleum and other inedible substances, while “natural flavor” can refer to anything that comes from a spice, fruit or fruit juice, vegetable or vegetable juice, edible yeast, herb, bark, bud, root, leaf—yes, we’re still going—meat, seafood, poultry, eggs, dairy products, or anything fermented from those foods, according to Food and Drug Administration spokesperson Deborah Kotz.

So is natural really better for us? “Natural and artificial flavors are the exact same molecules,” says Pia Sorensen, PhD, who teaches a course at Harvard on the intersection of chemistry and cooking. “Nutritionally, there is no difference between them. Usually, what’s nutritional in the food is not the flavor molecule.” The fact is, both natural and artificial flavors are often used to make processed foods enticing, even addictive.

“The flavorist’s job is to understand, on a molecular level, what flavors are made of,” says Dana Gasiorowski, senior flavorist at IFF. She explains that flavorists are also responsible for identifying flavor trends, even traveling on scouting expeditions to discover the next big flavor.

She tells me that passionfruit is big right now. To create a passionfruit-flavored product with actual passionfruit for, say, a vodka company, IFF flavorists would need to consume a quarter of the world’s passionfruit supply. That’s not cost-effective. Instead, the flavor team will look for cheaper sources that mimic the fruit’s molecular fingerprint. They’ll order fresh passionfruit from a supplier and taste it, then identify what they taste using a special lexicon of words (think of the wine wheel). From there, the company’s research and development laboratories identify the molecular fingerprint of the fruit and try to match those compounds to compounds available in the flavor lab.

Natural sources range from African violets, whose leaf offers a greenness that enhances watermelon flavoring, to the bark of Benzoin Siam, which is sometimes used in natural vanilla flavoring. The sulfur-containing volatiles in passionfruit are very similar to the ones in grapefruit, says Gasiorowski, so the volatiles derived from grapefruit might be used in a passionfruit flavor system.

Once extracted from the natural source, the flavor can be blended with others to create a flavor system.

Once she has the base substance, she’ll dilute it with water, glycerin, or ethanol. Then it’s time to start building the flavor by adding tropical notes like pineapple, cherry, and orange. And despite the fact that these flavors are blended in a lab, they’d still be considered natural on a label. Once the flavorists develop the recipe for a flavor blend, it’s industrially manufactured at a production plant, which is basically a giant
kitchen, according to the CDC.

So how do you know what you’re getting into?

The FDA doesn’t require food labels to say what’s in their “natural flavor” unless the ingredients include a common allergen like milk, egg, fish, shellfish, tree nuts, wheat, peanuts, or soy. If that’s the case, you’ll see a disclaimer below the ingredient list. But if you’re allergic to a less common allergen, like sesame, apple, or banana, you’ll have to contact the manufacturer directly to see if that ingredient is part of a product’s flavor blend.

For those of us who want to know exactly what’s in our food, well, we’re not going to get clarity any time soon. Some vendors, like Whole Foods, publish a list of unacceptable ingredients banned from their products, but it’s unclear whether that list applies to natural flavors. It seems the only way to know what’s in your food for sure is to cook from scratch with basic ingredients and trust the O.G. flavorist, Mother Nature, to make it taste good.