A Sneaky Theory of Where Language Came From

A Sneaky Theory of Where Language Came From  It might have hijacked our early ancestors’ brains. 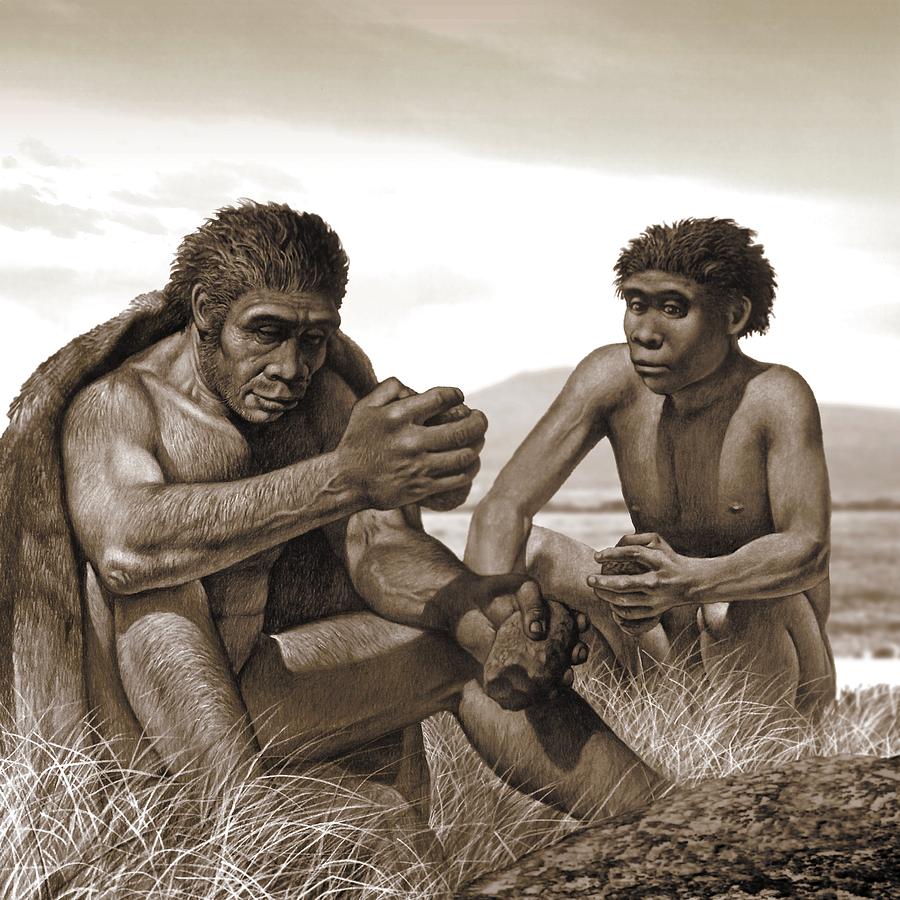 Homo ergaster  was a hominid that emerged about 1.9 million years ago in Africa.

I’m sitting in the sun on one of the first mild days of the spring, talking with a modern-day flintknapper about the origins of human language. His name is Neill Bovaird, and he’s neither an archaeologist nor a linguist, just a 38-year-old bearded guy with a smartphone in his pocket who uses Stone Age technology to produce Stone Age tools. Bovaird has been flintknapping for a couple decades, and as we talk, the gok gok gok of him striking a smaller rock against a larger one punctuates our conversation. Every now and then the gokking stops: A new flake, sharper than a razor blade, breaks off in his palm.

I’ve come to see Bovaird, who teaches wilderness-survival skills in western Massachusetts, because I want to better understand the latest theories on the emergence of language—particularly a new body of research arguing that if not for our hominin ancestors’ hard-earned ability to produce complex tools, language as we know it might not have evolved at all. The research is occurring at the cutting-edge intersections of evolutionary biology, experimental archaeology, neuroscience, and linguistics, but much of it is driven by a very old question: Where did language come from?

Oren Kolodny, a biologist at Stanford University, puts the question in more scientific terms: “What kind of evolutionary pressures could have given rise to this really weird and surprising phenomenon that is so critical to the essence of being human?” And he has proposed a provocative answer. In a paper in the journal Philosophical Transactions of the Royal Society B, Kolodny argues that early humans—while teaching their kin how to make complex tools—hijacked the capacity for language from themselves.

To understand what Kolodny’s getting at, I ask Bovaird to walk me through the history of Stone Age technologies. He starts by smashing an irregular, grapefruit-size stone between two larger rocks. He picks through the resulting fragments, looking for a shard with an excellent cutting edge. This is simple Oldowan technology, he tells me—the first stone tools, used by our hominin ancestors as far back as 2.5 million years ago.

Next, he flashes forward a million years to the technological revolutions of Homo ergaster. No longer did toolmakers simply knock stones together to see what they got; now they aimed for symmetry. Bovaird holds up his work in progress, a late Acheulean hand ax—the multi-tool of the middle-to-lower Paleolithic, good for cutting meat, digging dirt, smashing bone. The blade of this ax has a zigzag edge, with tiny, alternating flakes removed from each side of the cutting surface. To achieve this level of serration, Bovaird explains, he needs a precise understanding of how the stone works, as well as the ability to plan his work many steps in advance.

Somewhere on the timeline between the long run of the Oldowan and the more rapid rise of Acheulean technologies, language (or what’s often called protolanguage) likely made its first appearance. Oren Kolodny and his co-author, Shimon Edelman, a professor of psychology at Cornell University, say the overlap is not a coincidence. Rather, they theorize, the emergence of language was predicated on our ancestors’ ability to perform sequence-dependent processes, including the production of complex tools.

Kolodny’s arguments build off the groundbreaking experiments of Dietrich Stout, an anthropologist at Emory University. A flintknapper himself, Stout has taught hundreds of students how to make Acheulean-era tools, and he’s tracked their brain activity during the learning process. Stout found that his students’ white matter—or the neural connectivity in their brains—increased as they gained competence in flintknapping. His research suggests that producing complex tools spurred an increase in brain size and other aspects of hominin evolution, including—perhaps—the emergence of language.

But language couldn’t just pop out fully formed, like Athena from the head of Zeus. “Every evolutionary process, including the evolution of language, has to be incremental and composed of small steps, each of which independently needs to be beneficial,” Kolodny explains. Teaching, he says, was a crucial part of the process. When hominins like Homo ergaster and Homo erectus taught their close relatives how to make complex tools, they worked their way into an ever more specialized cultural niche, with evolutionary advantage going to those individuals who were not only adept at making and using complex tools, but who were also able—at the same time—to communicate in more and more sophisticated ways.

Kolodny points out what might seem like a contradiction in this notion: Many species of ape use tools in sequence-dependent ways and also have highly developed levels of communication. But the order in which those apes produce their utterances doesn’t make much difference to their meaning, Kolodny explains. “The question becomes not ‘How did language arise only in humans?’ but ‘Why did it not arise in other apes as well?’ And the answer is, the qualitative difference between us and other apes is they don’t have the communication system coupled to those temporal sequencing structural capabilities.”

That “coupling” is where the hijacking comes in. The technical term is exaptation, a word coined by the late paleontologist Stephen Jay Gould to describe an evolutionary event in which a biological function is repurposed for an alternate use. Kolodny and Edelman argue that the neural networks required for complex, hierarchical, sequence-dependent tool production were exapted by our brain’s communicative apparatus, which is why word order and sentence structure make such a difference to meaning. Rudimentary language, which evolved in the context of toolmaking and teaching, was ultimately able to break away from its immediate contexts—this is the hijacking part—eventually employing those original cognitive pathways for its own unique purposes. The result, as Monty Python viewers have appreciated for decades, was our modern, turbo-driven faculty for language.

In order to go along with Kolodny and Edelman’s theory of linguistic hijacking, you have to agree that language-related structures (like syntax) and action-related structures (like the sequential steps to making a tool) are similar enough to be driven by the same neurological mechanisms. But many scientists—including Noam Chomsky, the most influential of all modern linguists—aren’t willing to swallow that pill.

Chomsky has been notably reticent on the subject of language evolution. On numerous occasions, he’s called the question either irrelevant, unsolvable, or both. A surprise came in 2014, when Chomsky, Robert Berwick, and other titans in the field weighed in substantively on the topic of evolution for the first time, arguing in a series of jaw-dropping papers that language basically did show up on the scene like a fully formed Athena, syntax-driven shield in hand. “The language faculty is an extremely recent acquisition in our lineage,” these authors wrote, “and it was acquired not in the context of slow, gradual modification of preexisting systems under natural selection but in a single, rapid, emergent event.”

Berwick, a professor of computational linguistics at MIT and the co-author with Chomsky of Why Only Us: Language and Evolution, sees little merit in the stone-tool-based theories proposed by researchers like Stout and Kolodny. “The Stout business doesn’t work,” Berwick wrote to me in an email. “The experimental findings show that, to the contrary, verbal language DOES NOT FACILITATE toolmaking.” Berwick calls the purported connection between toolmaking and language a useful metaphor, at best.

Chomsky’s position is such a brazen refutation of known evolutionary processes that Kolodny, Stout, and many of their colleagues aren’t sure how to engage with it. Stout claims that Berwick’s refutation of his research misses the mark entirely. Ultimately, Stout tells me, he expects the positions of Berwick, Chomsky and other formalist linguists to find a sort of synthesis with his own views on language, but he doesn’t see agreement occurring anytime soon.

Luckily, the flintknapper Bovaird and I don’t need a synthesis of theories of language evolution in order to sit in the sun and talk. Birds are singing, a woodpecker raps its head against a dead trunk, and Bovaird is “pressure-flaking” a fine, serrated edge on a symmetrical obsidian blade. He’s way past the Acheulean now, demonstrating the refined techniques used by the essentially modern Homo sapiens of the upper Paleolithic. Picking up a rounded tool made of antler—he’ll use it as a hammer—he compares flintknapping to a sophisticated game of chess, in which the order of every move is of supreme importance. It’s an observation that either has everything to do with how language got here, or—if you’re in a Chomskyan frame of mind—has nothing to do with language evolution at all.

“The stone has rules, and you can’t break the rules,” Bovaird says. Then he leans over the blade, flexes his wrist, and strikes.