What's making these things fly out of the frozen continent? 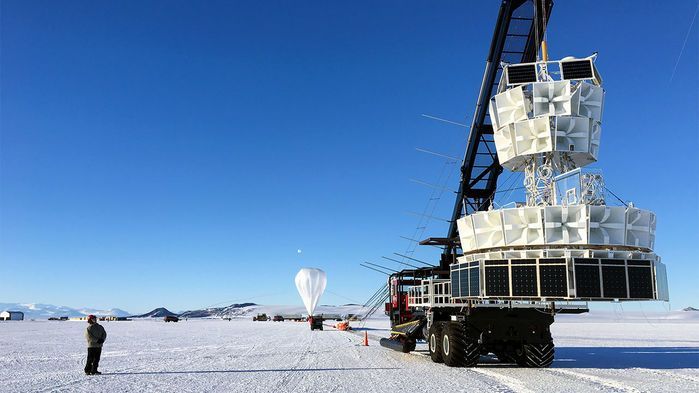 Researchers prepare to launch the Antarctic Impulsive Transient Antenna (ANITA) experiment, which picked up signals of impossible-seeming particles as it dangled from its balloon over Antarctica.
(Image: © NASA)

Our best model of particle physics is bursting at the seams as it struggles to contain all the weirdness in the universe. Now, it seems more likely than ever that it might pop, thanks to a series of strange events in Antarctica. .

The death of this reigning physics paradigm, the Standard Model, has been predicted for decades. There are hints of its problems in the physics we already have. Strange results from laboratory experiments suggest flickers of ghostly new species of neutrinos beyond the three described in the Standard Model. And the universe seems full of dark matter that no particle in the Standard Model can explain.

But recent tantalizing evidence might one day tie those vague strands of data together: Three times since 2016, ultra-high-energy particles have blasted up through the ice of Antarctica, setting off detectors in the Antarctic Impulsive Transient Antenna (ANITA) experiment, a machine dangling from a NASA balloon far above the frozen surface.
As Live Science reported in 2018, those events — along with several additional particles detected later at the buried Antarctic neutrino observatory IceCube — don't match the expected behavior of any Standard Model particles. The particles look like ultra high-energy neutrinos. But ultra high-energy neutrinos shouldn't be able to pass through the Earth. That suggests that some other kind of particle — one that's never been seen before — is flinging itself into the cold southern sky.

Now, in a new paper, a team of physicists working on IceCube have cast heavy doubt on one of the last remaining Standard Model explanations for these particles: cosmic accelerators, giant neutrino guns hiding in space that would periodically fire intense neutrino bullets at Earth. A collection of hyperactive neutrino guns somewhere in our northern sky could have blasted enough neutrinos into Earth that we'd detect particles shooting out of the southern tip of our planet. But the IceCube researchers didn't find any evidence of that collection out there, which suggests new physics must be needed to explain the mysterious particles.

To understand why, it's important to know why these mystery particles are so unsettling for the Standard Model.

Neutrinos are the faintest particles we know about; they're difficult to detect and nearly massless. They pass through our planet all the time — mostly coming from the sun and rarely, if ever, colliding with the protons, neutrons and electrons that make up our bodies and the dirt beneath our feet.

But ultra-high-energy neutrinos from deep space are different from their low-energy cousins. Much rarer than low-energy neutrinos, they have wider "cross sections," meaning they're more likely to collide with other particles as they pass through them. The odds of an ultra-high-energy neutrino making it all the way through Earth intact are so low that you'd never expect to detect it happening. That's why the ANITA detections were so surprising: It was as if the instrument had won the lottery twice, and then IceCube had won it a couple more times as soon as it started buying tickets.

And physicists know how many lottery tickets they had to work with. Many ultra-high-energy cosmic neutrinos come from the interactions of cosmic rays with the cosmic microwave background (CMB), the faint afterglow of the Big Bang. Every once in a while, those cosmic rays interact with the CMB in just the right way to fire high-energy particles at Earth. This is called the "flux," and it's the same all over the sky. Both ANITA and IceCube have already measured what the cosmic neutrino flux looks like to each of their sensors, and it just doesn't produce enough high-energy neutrinos that you'd expect to detect a neutrino flying out of Earth at either detector even once.

"If the events detected by ANITA belong to this diffuse neutrino component, ANITA should have measured many other events at other elevation angles," said Anastasia Barbano, a University of Geneva physicist who works on IceCube.

But in theory, there could have been  ultra-high-energy neutrino sources beyond the sky-wide flux, Barbano told Live Science: those neutrino guns, or cosmic accelerators.
"If it is not a matter of neutrinos produced by the interaction of ultra-high-energy cosmic rays with the CMB, then the observed events can be either neutrinos produced by individual cosmic accelerators in a given time interval" or some unknown Earthly source, Barbano said.

Blazars, active galactic nuclei, gamma-ray bursts, starburst galaxies, galaxy mergers, and magnetized and fast-spinning neutron stars are all good candidates for those sorts of accelerators, she said. And we know that cosmic neutrino accelerators do exist in space;  in 2018, IceCube tracked a high-energy neutrino back to a blazar, an intense jet of particles coming from an active black hole at the center of a distant galaxy.

ANITA picks up only the most extreme high-energy neutrinos, Barbano said, and if the upward-flying particles were cosmic-accelerator-boosted neutrinos from the Standard Model — most likely tau neutrinos — then the beam should have come with a shower of lower-energy particles that would have tripped IceCube's lower-energy detectors.

"We looked for events in seven years of IceCube data," Barbano said — events that matched the angle and length of the ANITA detections, which you'd expect to find if there were a significant battery of cosmic neutrino guns out there firing at Earth to produce these up-going particles. But none turned up.

Their results don't completely eliminate the possibility of an accelerator source out there. But they do "severely constrain" the range of possibilities, eliminating all of the most plausible scenarios involving cosmic accelerators and many less-plausible ones.

"The message we want to convey to the public is that a Standard Model astrophysical explanation does not work no matter how you slice it," Barbano said.

Researchers don't know what's next. Neither ANITA nor IceCube is an ideal detector for the needed follow-up searches, Barbano said, leaving the researchers with very little data on which to base their assumptions about these mysterious particles. It's a bit like trying to figure out the picture on a giant jigsaw puzzle from just a handful of pieces.

Right now, many possibilities seem to fit the limited data, including a fourth species of "sterile" neutrino outside the Standard Model and a range of theorized types of dark matter. Any of these explanations would be revolutionary.hjh But none is strongly favored yet.

"We have to wait for the next generation of neutrino detectors," Barbano said.