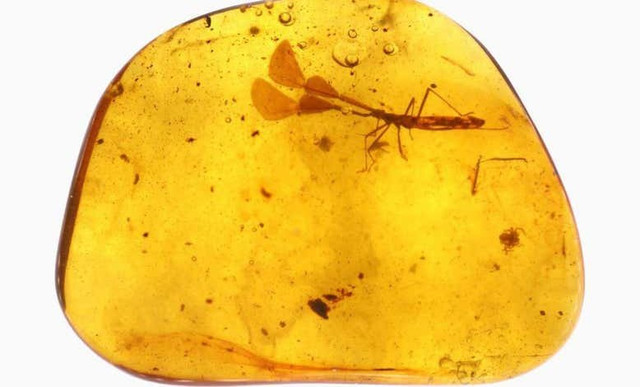 Most likely, unusual processes saved the creature from predators. The insect was found in amber deposits in the territory of modern Myanmar. It attracted the attention of scientists with bizarre wide and long antennas on their heads.
“This could be a new type of antenna for insects,” said Bao Jie Du, co-author of a study from Nankai University, China.
According to Bao-Jie Du, she was shocked when she first examined the sample, whose age is 99 million years. Scientists called the new insect species Magnus Antenna wuae. It belongs to the family of local painters (Coreidae) – semi-rigid-winged insects from the suborder of bugs.
The genuine family of local painters is distinguished by a special extension of the antennae and lower legs. However, the origin and early diversity of such expansions in Coreidae is unknown.
The antennae found in amber were 12.3 times longer and 4.4 times wider than the head. Scientists suggest that these giant antennae served Magnus Antenna wuae in order to focus on them the attention of predators and distract from the head and other parts of the body, avoiding a deadly attack.
Scientists are sure that the torn antennas from these insects could grow back.
Researchers note that such highly specialized traits have advantages in finding partners and in protecting against predators. However, maintaining such traits is associated with corresponding costs, which may limit the ability of individual species to adapt to changing conditions and increase the risk of extinction.
The authors of the work believe that the elongated antennas Magnus Antenna wuae, although they distracted attention from predators from other parts of the body, could themselves attract their increased attention.
In addition, these appendages probably caused the insect to move more slowly, and also required increased resources for their regeneration and metabolism.

Quote by Paracelsus:
“This could be a new type of antenna for insects,”