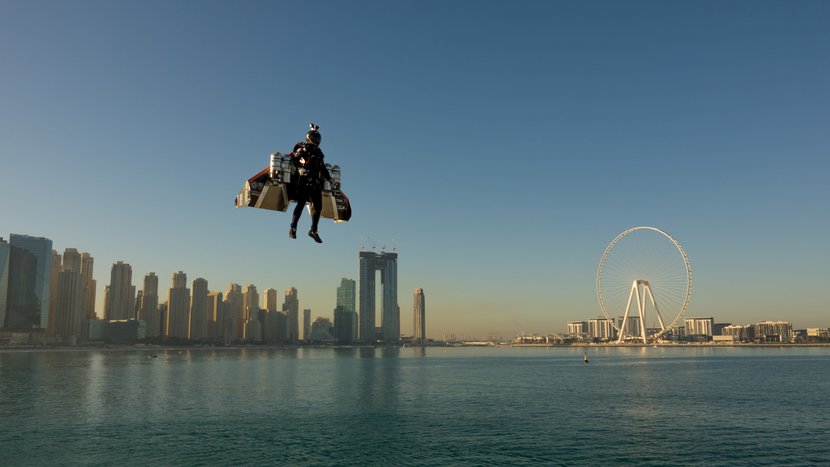 Dubai’s Jetmen have made history once again: this time for the first 100% autonomous human flight (with vertical takeoff).

The video posted to Sheikh Hamdan bin Mohammed, Crown Prince of Dubai’s, Instagram account (and now YouTube) shows one of the ‘Jetmen’ taking off from X-Dubai’s Dubai Marina location, and then soaring up into the air over JBR.

Unlike previous missions, this marks the first time one of the Jetmen has been able to takeoff straight up in the air, more typical of Marvel’s Iron Man.

The latest mission – which is supported by Expo 2020 – was the first time the pilots have taken off vertically. Typically, as in the last Jetman mission – over China’s Tianmen Mountains – the Jetmen must jump out of a helicopter before engaging their engines.

The stunt took place on February 14, when Vince Reffet took off over Jumeirah Beach Residence. Reffet travelled over 100-metres in the first 8-seconds of the flight, reaching a height of 1,800-metres at the end of the 3-minute flight.

The Jetman Dubai project aims to demonstrate what can be done when technology and nerves of steel combine.

The Jetmen – Vice Reffet and Fred Fugen – are currently working with Emirati skydive pro Ahmed Al Shehhi. The project is also supported by Swiss former military pilot Yves Rossy, who invented the carbon-fibre Jetman pack.
The Jetman can reach speeds of more than 260kph – and travel for around 55 kilometres.