12
The Ruler Of The Universe
Next

Hats off to the girls at a Sussex secondary school..

High school girls at Sussex secondary school were locked out of school for wearing skirts and refusing to wear the gender neutral uniforms.

Female students at a school in the UK were prevented by officials and police from attending class because they refused to comply with a new “gender neutral” uniform policy.

Around 100 students protested outside the gates of Priory School in Lewes in response to a letter sent at the end of the summer advising they would be mandated to wear trousers at all times.

The school claimed that the policy change was put in place to “address inequality,” and be “inclusive,” but students and parents were outraged. 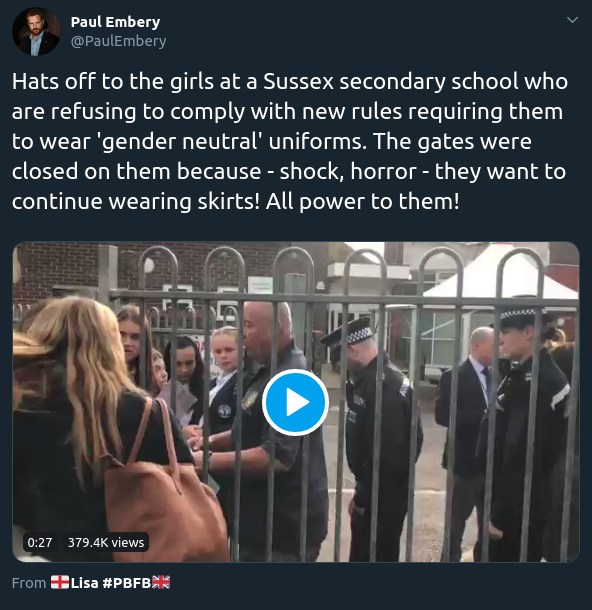 I live in the UK and all I can say - "Fucking Stupid Country!"

Terrorists are minorities, and in the UK minorities get to dictate to the majority. Terrorists win!

It always astounds me how the pro-choice equality brigade are surprisingly un-pro-choice when it comes to everyone else but them.

Good for them, this is absolute insanity. Hopefully come Monday, boys will stand outside the gate in skirts, in solidarity with the girls.

I saw a few unhappy girls in slacks on my Facebook feed full of "first day back" pics.